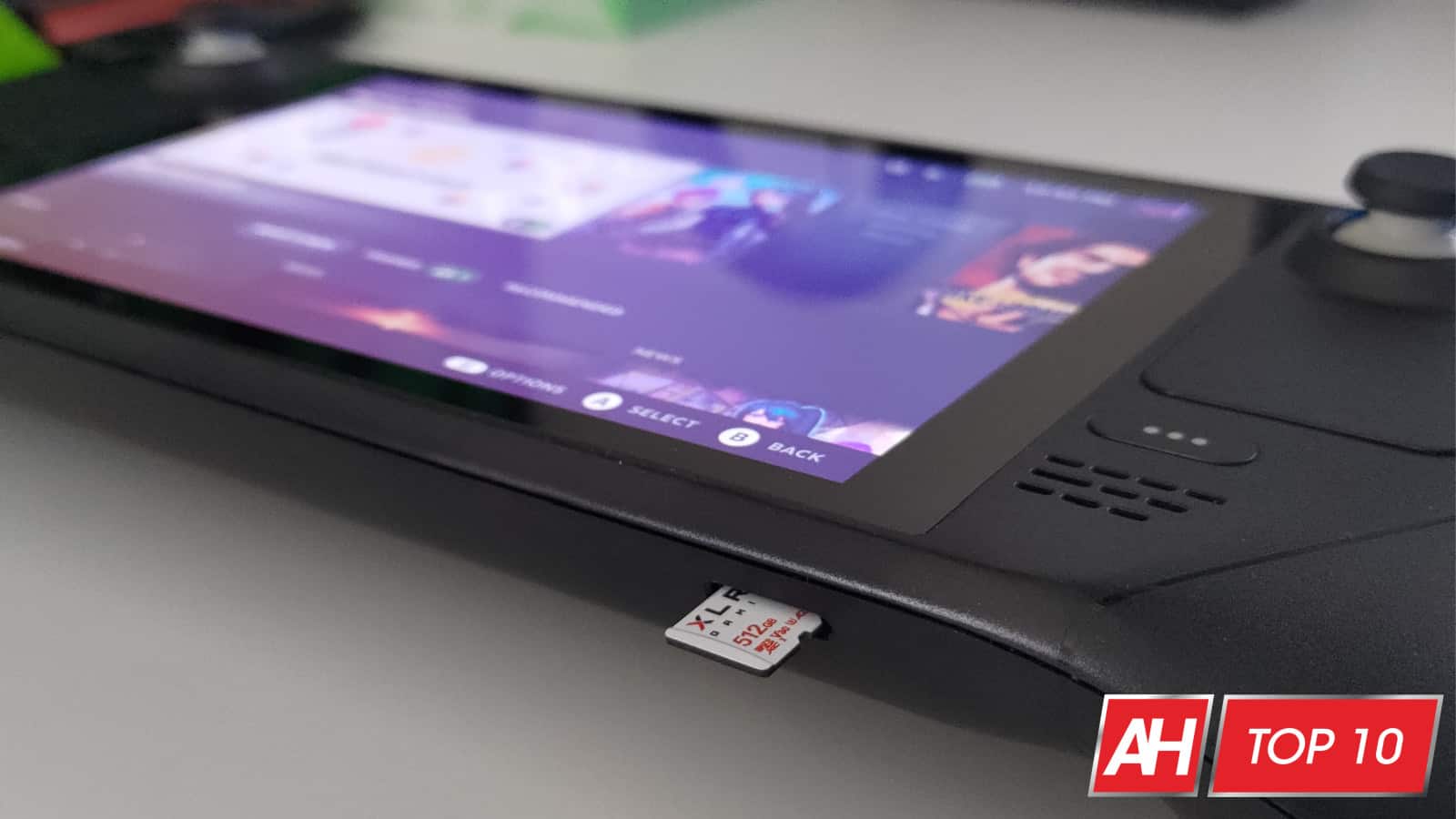 The Steam Deck so far has proven to be a wonderful little machine for playing games, but one thing you’ll want is at least one microSD card for storage, and we thought we’d round up the best ones to consider.

Now, if you ended up with the 512GB version of the Steam Deck you may have just enough storage for games you plan to play. 512GB isn’t a lot of storage especially for how big games are these days, but if you’re the type to juggle your installs when you need to make room for something, then it might suffice.

If you’re like us and don’t want to deal with that kind of hassle, then a microSD card for the Steam Deck is definitely the way to go. It’s easier than replacing the internal SSD and if you aren’t sure how to do it, then chances are you might have to pay to have someone do it for you. Making the microSD option cheaper as well.

In short, for the majority of users, a microSD card is going to be the best way to get more game storage on the Steam Deck. But, which ones should you be looking at? You shouldn’t just use any old microSD card. You can, but you shouldn’t, as you want one with optimal speeds for loading games. So here’s our list of the best microSD cards for the Steam Deck that will meet those standards.

The Best microSD cards for the Steam Deck Kicking things off we’re suggesting the SanDisk Extreme Pro card for a few reasons. For starters, it comes from Western Digital’s SanDisk brand which has been around forever and is a trusted name in storage products. For another, the Extreme Pro is one of its newer cards and comes in a variety of sizes. Though we wouldn’t suggest anything under a 128GB and for our own purposes, we’d probably go higher than that. Because as noted above, many AAA games these days are insanely large.

The only downside to this card is that the 1TB and even the 512GB are a little expensive. That being said, there are other options on this list that cost less and will give you the same amount of storage. For us though, this has performed really well during our testing so far. This is actually the first card we started using with the Steam Deck and like the SanDisk Extreme Pro, it has fast read and write speeds. It also comes in up to 512GB in size. We have the 512GB model in our Steam Deck, and it’s been a real boon for allowing us to install more games.

Since we went with the 256GB version of the Steam Deck, storage began to fill up fast with games like Elden Ring and Final Fantasy XIV. So a larger size card was definitely needed. PNY also designed this card specifically to be used for gaming in devices like the Nintendo Switch, mobile devices, and the Steam Deck. That doesn’t mean it can only be used for those devices. But it does help that PNY had portable gaming in mind when making this product.

As for read and write speeds, you’re looking at up to 100MB/s for read and up to 90MB/s for write. Putting it mostly on par with the card above. And easily making this one of the best microSD cards for the Steam Deck. Samsung is another trusted brand in memory and storage so naturally we’d suggest the Evo Select card as an option. It has the same read and write speeds as the PNY XLR8 Gaming class card, but you’re looking at over twice the price for it right now on Amazon. Normally it retails for $69.99 which is only $10 more than the 512GB PNY card above.

But all of the 512GB models seem to be from third-party resellers. Unfortunately, Samsung’s website is out of stock on this one so Amazon is probably your best bet if you want this particular card. We would suggest the PNY though since you’ll spend less.

That being said, you can also pick up the Evo Select in a 256GB for $29.99 which is pretty affordable. Another good option is this Lexar card which comes in 128GB, 256GB, and 512GB storage sizes. It’s also a high-speed card with read speeds of up to 100MB/s. The one downside is that the write speeds are a bit slower at up to 30MB/s. So in comparison to any of the other cards so far, it loses out there.

However, this might not make that much of a difference to you. And if that’s the case you can’t go wrong here. We still think the PNY is a better value though with higher write speeds and the same amount of storage for a lower price.

Nevertheless, this is still one of the best microSD cards for the Steam Deck. If you really prefer a SanDisk card but don’t want to pay as much, then you might want to consider the SanDisk Extreme as opposed to the Extreme Pro. You can pick up this model of microSD card in a 1TB storage size for $167.71 on Amazon at the time of writing. Which is a fraction of the $399.99 price of the Pro model at 1TB.

As for read and write speeds, you’re looking at up to 160MB/s for read and up to 90MB/s for write. So really, you’re not losing much by not getting the Extreme Pro, and you still get a SanDisk card with 1TB of storage for all those games. Another one of the best cards is the Lexar Play card, which can come in up to 1TB and has read speeds up to 150MB/s. And, the 1TB model only costs $133.99 at the time of writing so this is a pretty good deal compared to other 1TB cards on this list. This was also designed with gaming in mind and works great in devices like the Nintendo Switch. So naturally it’ll be a great option for the Steam Deck too. It’s not the cheapest 512GB model card on this list but it definitely has faster write speeds than any other option on it. So make of that what you will. Rounding out this list is the Samsung Evo Plus in a 512GB model card. It’s available at a slightly cheaper price than the Lexar card above and it comes from Samsung so it’s a well-known brand. Read and write speeds aren’t as fast as some of the other options though.

Value-wise, we’d lean towards one of the earlier options, but this is still one of the best microSD cards for the Steam Deck and it isn’t too expensive. Again though, the 512GB card from PNY is the cheapest 512GB option available that’s in this list. And for the combination of read and write speeds and price, plus it being a card that was designed for portable gaming devices, we think it’s a better option.

That being said, all the cards listed should work great for the Steam Deck. So it really comes down to what you want.