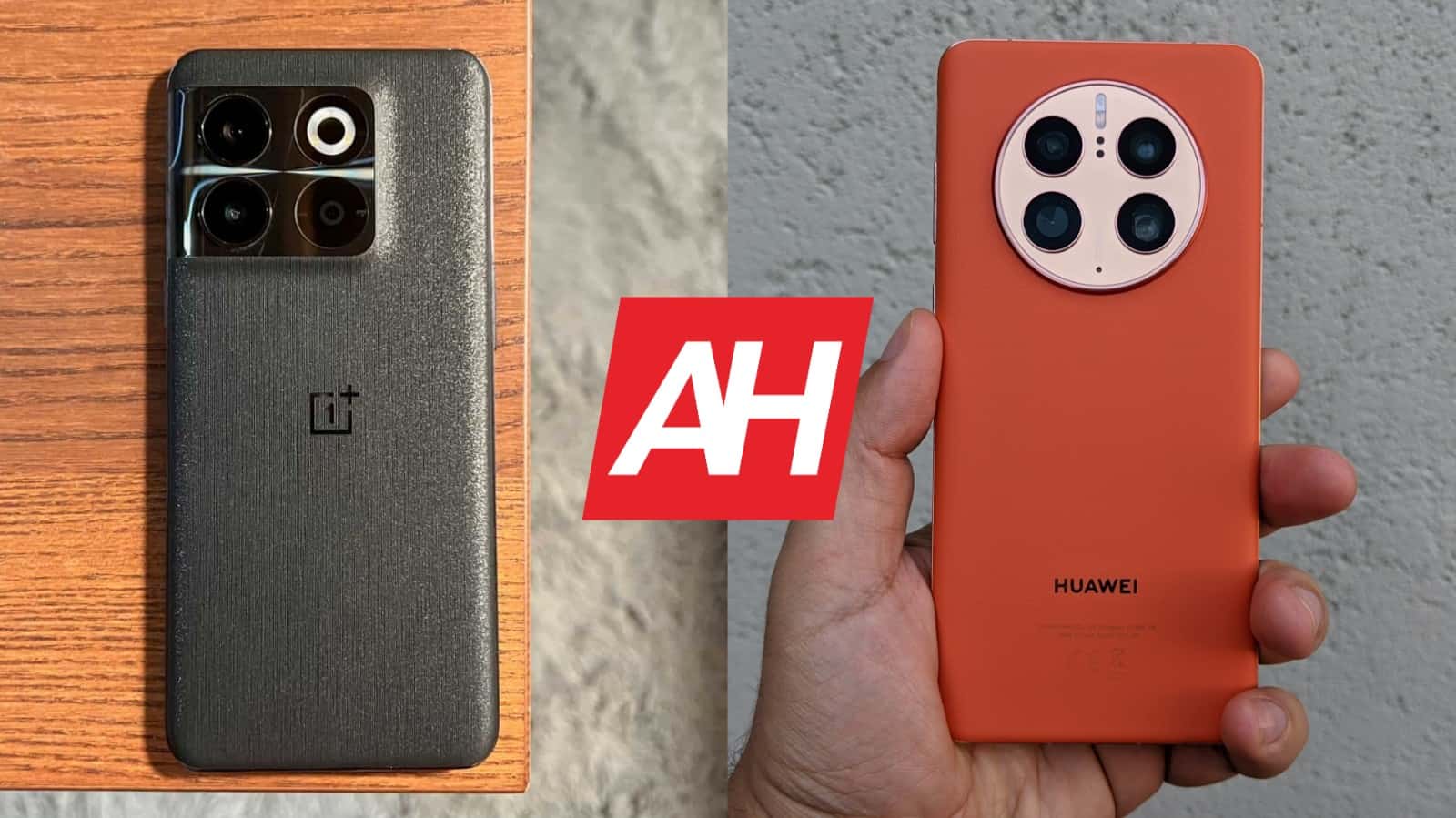 Following our OnePlus 10 Pro comparison with the best of Huawei, it’s time to do the same with the OnePlus 10. In this article, we’ll be comparing the OnePlus 10T vs Huawei Mate 50 Pro. OnePlus’ T series smartphone arrived in August last year, and even though it didn’t technically trump the ‘Pro’ model, it does offer some improvements compared to that unit. How it compares with the best Huawei has to offer? Well, we’re here to find out.

We’ll first list the specs of both smartphones, as per usual, and will then compare them across a number of categories. Some of these may actually surprise you. Before we get started, though, do note that the Huawei Mate 50 Pro does not include Google services. If that’s not a problem for you, the Mate 50 Pro truly is a beastly phone, as you’ll find out in this comparison. Having said that, let’s get started, shall we?

The OnePlus 10T actually includes a plastic frame, and a glass back. By the feel or the look of it, you’d never guess it’s a plastic frame, though. The phone feels quite premium in the hand, as does the Mate 50 Pro. Speaking of which, the Huawei Mate 50 Pro comes with a frame made out of metal, and either glass or vegan leather on the back. We’ve tested the variant with a vegan leather back, by the way.

These two phones are almost identical when it comes to dimensions. The OnePlus 10T is very slightly taller, narrower, and thicker than the Mate 50 Pro. All dimensions are less than 1mm different, so… they’re basically the same in terms of dimensions. They are also quite similar when it comes to weight, as the OnePlus 10T is a couple of grams lighter than the Huawei Mate 50 Pro. Both phones weigh over 200 grams, but less than 210.

The OnePlus 10T includes a flat display, with a centered display camera hole. The bezels are fairly thin, while its physical buttons are spread on both the left and right sides. The Mate 50 Pro includes a notch at the top of the display, for a good reason, the phone offers advanced facial scanning. It includes a curved display, and very thin bezels. Their corners are slightly curved, almost to the same extent.

If we flip the two phones around, you’ll notice the differences on the back too. The OnePlus 10T includes a square-ish camera island in the top-left corner. The Huawei Mate 50 Pro has a circular camera island that is centered at the top of the phone’s back. They do look fairly different in that regard. The two phones do feel different in the hand, despite the fact they’re similar in terms of size. The Mate 50 Pro nailed weight distribution, and in its vegan leather model, it’s noticeably less slippery than the OnePlus 10T.

The OnePlus 10T includes a 6.7-inch fullHD+ (2412 x 1080) Fluid AMOLED display. That panel is flat, and it supports a 120Hz refresh rate. It can also project up to 1 billion colors, while it supports HDR10+ content as well. OnePlus included Gorilla Glass 5 protection on top of this display. We’re looking at a 20:9 display aspect ratio here, with around 394 ppi. The truth is, both of these displays are excellent. You won’t really find them lacking in any way. They’re bright enough, offer great viewing angles, and the colors are quite vivid. The blacks are deep, and the touch response is good. They’re not as bright as some other panels on flagship-grade phones, but for most scenarios, they’re more than bright enough. Only in direct sunlight, you may notice the difference between these, and some panels that are close to 2,000 nits.

The OnePlus 10T and Huawei Mate 50 Pro actually include the same chip, but with different connectivity options. The Snapdragon 8+ Gen 1 fuels both phones, but the Mate 50 Pro has a 4G variant, due to the US ban. Having said that, this is still one of the best chips on the market, and it’s not only great in terms of performance, but power consumption too. The OnePlus 10T also includes up to 16GB of LPDDR5 RAM and UFS 3.1 flash storage. The Mate 50 Pro comes with 8GB of LPDDR5 RAM and UFS 3.1 flash storage.

That being said, these two phones are outstanding when performance is concerned. They fly through everything you throw at them. Both phones are well-optimized, they can open and close apps really fast, they’re great for multitasking, browsing, image processing, video processing, consuming multimedia, and so on. Even when gaming is concerned, they do a great job. Do note that the game selection is not that vast on the AppGallery on the Mate 50 Pro, but you can always try out a third-party store such as Aurora Store. They both get warm during intense gaming, but nothing you wouldn’t be able to handle. It also doesn’t impact their performance in a significant way.

How good is it? Well, let’s just say we managed to push the phone past the 10-hour screen-on-time mark on a number of occasions. Getting over 9 hours of screen-on-time is easily possible on the device. The Huawei Mate 50 Pro provided something closer to 7-7.5 hours of screen-on-time. Do note that we’re not gaming a lot on our phones, but we do pretty much everything else you can imagine. Your mileage may still vary, of course.

The OnePlus 10T’s camera performance was not the best at first. OnePlus did improve it over time, with updates, but the Huawei Mate 50 Pro is the better camera smartphone out of these two. In fact, the Huawei Mate 50 Pro is one of the most reliable camera phones in the market at the moment. I basically always got the shot I wanted while I was testing the phone, and it felt similar to use to the Pixel’s camera, but with different-looking images. The telephoto images are easily better on the Mate 50 Pro, as the OnePlus 10T does not include a telephoto camera at all. It includes a macro camera as its third camera on the back, and that 2-megapixel camera can be somewhat useful when there’s excellent lightning in a shot, but most of the time, you’ll want to avoid it. OEMs should stop including 2-megapixel macro cameras on phones, that’s for sure.

Huawei’s new XMAGE camera setup definitely works, and the variable aperture that is part of it is definitely not a gimmick. You won’t even feel the loss of Leica on this phone. The OnePlus 10T is just okay in the camera department, it’s not one of the best camera phones out there, it focuses on other things a bit more.

Both of these phones ship with a stereo speaker setup. Both sets of speakers do sound really nice, but the Mate 50 Pro does have the edge in that department. They sound a bit louder to the naked eye, but more importantly, they sound a bit more detailed at the same time.

You will not find a 3.5mm headphone jack on either of the two phones. There is a Type-C port at the bottom of both devices, though, so you can always use wired audio if you want. Bluetooth 5.2 comes included on both phones for wireless audio connections.