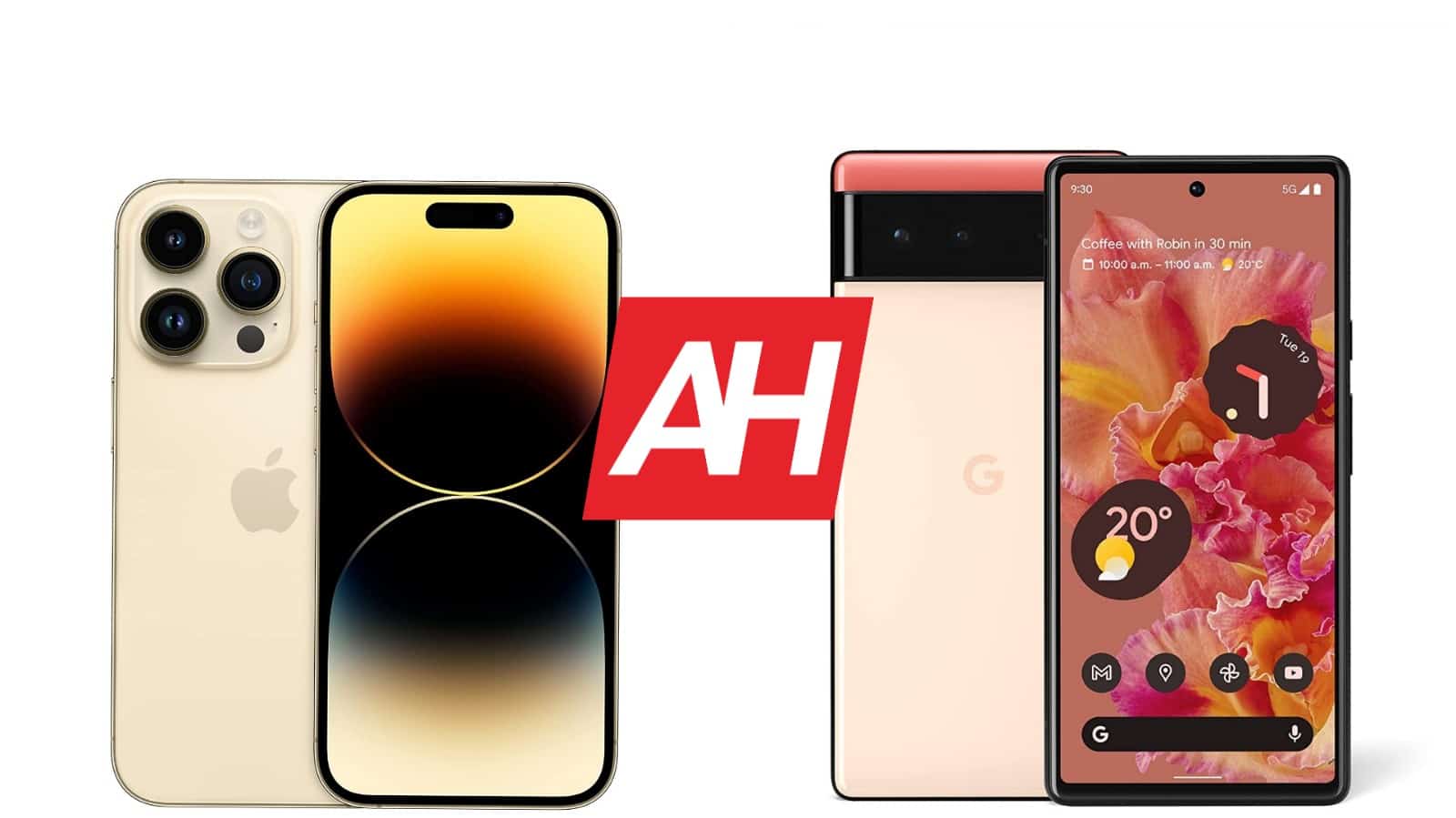 We’ve recently compared the ‘Max’ variant of the new iPhone with the ‘Pro’ model of Google’s flagship series. This time around, we’ll be comparing the Apple iPhone 14 Pro vs Google Pixel 6, their siblings. The iPhone 14 Pro is basically identical to the Pro Max aside from the battery size, display size, and overall footprint. There are a bit more differences between the regular and ‘Pro’ Pixel 6 models, though.

The Pixel 6 is more affordable than the iPhone 14 Pro, considerably more affordable. So, keep that in mind before we get into it. These are great options on the iOS and Android side of things, which is why we’re comparing them in the first place. We’ll start things off by listing their specs, and after that, we’ll take a look at the designs, displays, performance, battery life, camera performance, and audio quality.

Both of these phones are made out of metal and glass, but different variants of those materials. The iPhone 14 Pro utilizes a stainless steel frame, and unnamed Gorilla Glass protection on the back. The Pixel 6 has an aluminum frame, and Gorilla Glass 6 on the back. The two phones also look considerably different. The Pixel 6 is more square-ish, and it has more curves than the iPhone 14 Pro.

The iPhone 14 Pro has entirely flat front and back sides, while it is also flat all around (sides). The Pixel 6’s back curves slightly towards the edges, and its sides are definitely not flat. The in-hand feel is entirely different, it all depends on what you prefer. It’s worth noting that the iPhone 14 Pro does cut into your hand a bit more, but less than the iPhone 13 Pro did due to slight design changes.

The iPhone 14 Pro is shorter, narrower, and thinner, which is expected as it has a considerably smaller display. It is only a gram lighter than the Pixel 6, though. The iPhone 14 Pro is actually quite hefty for its size. Now, the sheer look of these two phones is entirely different, and that goes for basically every part of them. The iPhone 14 Pro has a pill-shaped cutout on the display, and uniform bezels. The Pixel 6 has a much smaller cutout, a hole punch, and it’s also centered. Its bezels are not uniform though, despite the fact they’re very thin.

Even when you flip them around, you’ll notice massive differences. The iPhone 14 Pro has a camera island in the top-left corner. There are three cameras placed there in a recognizable iPhone setup, and a ToF 3D camera as well. The Pixel 6 has a camera visor on the back, which is also easy to recognize. That visor goes from one side of the phone to the other. It’s much thinner than what the iPhone 14 Pro has to offer, but also much longer. These two devices are immensely different, though both feel premium in the hand. It all depends on what you prefer, of course.

The iPhone 14 Pro has a considerably smaller display than the Pixel 6. It features a 6.1-inch 2556 x 1179 LTPO Super Retina XDR OLED panel. This is a flat 120Hz display with HDR10 and Dolby Vision support. It gets immensely bright at 2,000 nits of max brightness, in special conditions, such as direct sunlight. This display is protected by scratch-resistant ceramic glass, and we’re looking at a 19.5:9 aspect ratio. Technically, on paper, the iPhone 14 Pro’s display does have an edge. In real-life, they both look great, but we’d still give an advantage to the iPhone’s panel. It does get brighter when you need it to, not to mention that it offers a higher refresh rate, if that’s what you care about. Both displays will be more than good for the vast majority of people, though. Both offer vivid colors, good viewing angles, and are quite responsive. So, even though one is technically better than the other, most people won’t really know the difference, unless they spend a lot of time outdoors when it’s sunny.

When it comes to performance-related specs, these two phones are quite different as well. The iPhone 14 Pro comes with Apple’s new A16 Bionic chip, 6GB of RAM, and NVMe storage. The Pixel 6 includes the Google Tensor chip, along with 8GB of LPDDR5 RAM and UFS 3.1 flash storage. Apple’s chip is more powerful, while everything else is on Google’s side, technically. They both perform admirably, though.

Google managed to get rid of almost all bugs that were plaguing the Pixel 6 since launch, and it’s actually a nice experience at this point in time, save for the battery life, more on that later, though. They both perform great in everyday tasks, and even games. They can run pretty much any game from their respective app stores with ease. Everything is quite snappy on both phones, and we don’t really have major complaints, not at all.

Ah… the battery life. That’s where the iPhone 14 Pro does have an edge, at least at the time of writing this article. The Pixel 6’s battery life has been quite odd since the Android 13 update. We’ll talk more about that soon, let’s first get the specs out of the way. The iPhone 14 Pro is equipped with a 3,200mAh battery, while the Pixel 6 utilizes a 4,614mAh unit. Do note that the two OS’ handle battery life considerably differently, though, so that difference is not really all that important.

The iPhone 14 Pro offers really good battery life, though not as good as its predecessor. If you’re not a gamer, you should be able to get over 6.5-7 hours of screen-on-time with the device. Do note that battery life varies a lot from one person to the next, and talking about exact numbers is not the best idea. So, be prepared for your results to be different. The battery life is good, though.

The Pixel 6 is a different story. The phone had amazing battery life up until the Android 13 update, basically. The thing is, the battery life is still amazing, as long as you’re on WiFi most of the day. In such cases, you can get over 8 hours of screen-on-time even. If you spend most of your day hooked up to mobile data, you’ll get half that much. Something is obviously wrong.

When the camera quality is concerned, in some cases personal preference goes a long way. I’ll say that both of these phones have excellent cameras, but we still prefer the Pixel 6 for stills, and the iPhone 14 Pro for video. More on that soon, let’s talk hardware first. The iPhone 14 Pro is equipped with a 48-megapixel main camera, and two 12-megapixel units (ultrawide and telephoto cameras). There is also a ToF 3D sensor on the back. The Pixel 6, on the flip side, has a 50-megapixel main camera, and a 12-megapixel ultrawide unit. So, how do they compare when it comes to pictures? It’s not exactly a secret that Google’s camera algorithms are amazing. The company had some of the best camera smartphones over the year, as the Pixel 6 is no different. It has a new camera sensor, well, not technically new, but new for the Pixel series. The camera on this phone is extremely reliable, and it’s not easy to make it mess up a picture, regardless of the scene. It does an amazing job with HDR, and even though it doesn’t look entirely realistic, it looks great, and the images simply pop. It also does a great job in low-light situations.

The iPhone 14 Pro does have some problems with highlights. It has a tendency to blow out highlights still, as was the case with its predecessor. Other than that, it does a great job, and the pictures do look more realistic. Well, it does have a tendency to oversharpen parts of an image sometimes. Apple will probably fix that via an update. Neither phone handles reflections all that well, though, in low light.

The iPhone 14 Pro does a better job in the video department. It has been that way for years, and the iPhone 14 Pro continues that trend. The video footage ends up looking extremely stable, and with no artifacting or anything of the sort. It is simply well-optimized, and that’s that. Even in low light, it looks good.

Both smartphones are equipped with a set of stereo speakers, while neither of them has an audio jack. The iPhone 14 Pro supports Bluetooth 5.3, while the Pixel 6 has Bluetooth 5.2 support. That being said, the sound from their stereo speakers is excellent. It’s everything you can ask from it in a smartphone, it’s not muffled, but clear, and there’s even some bass to it. The iPhone 14 Pro speakers do get slightly louder, but they’re similar in many ways.

If you’d like to connect your headphones to either of these phones, you’ll either need to use Bluetooth, or their respective ports for a wired connection. The iPhone 14 Pro still uses a Lightning port, unfortunately, while the Pixel 6 has a Type-C port.