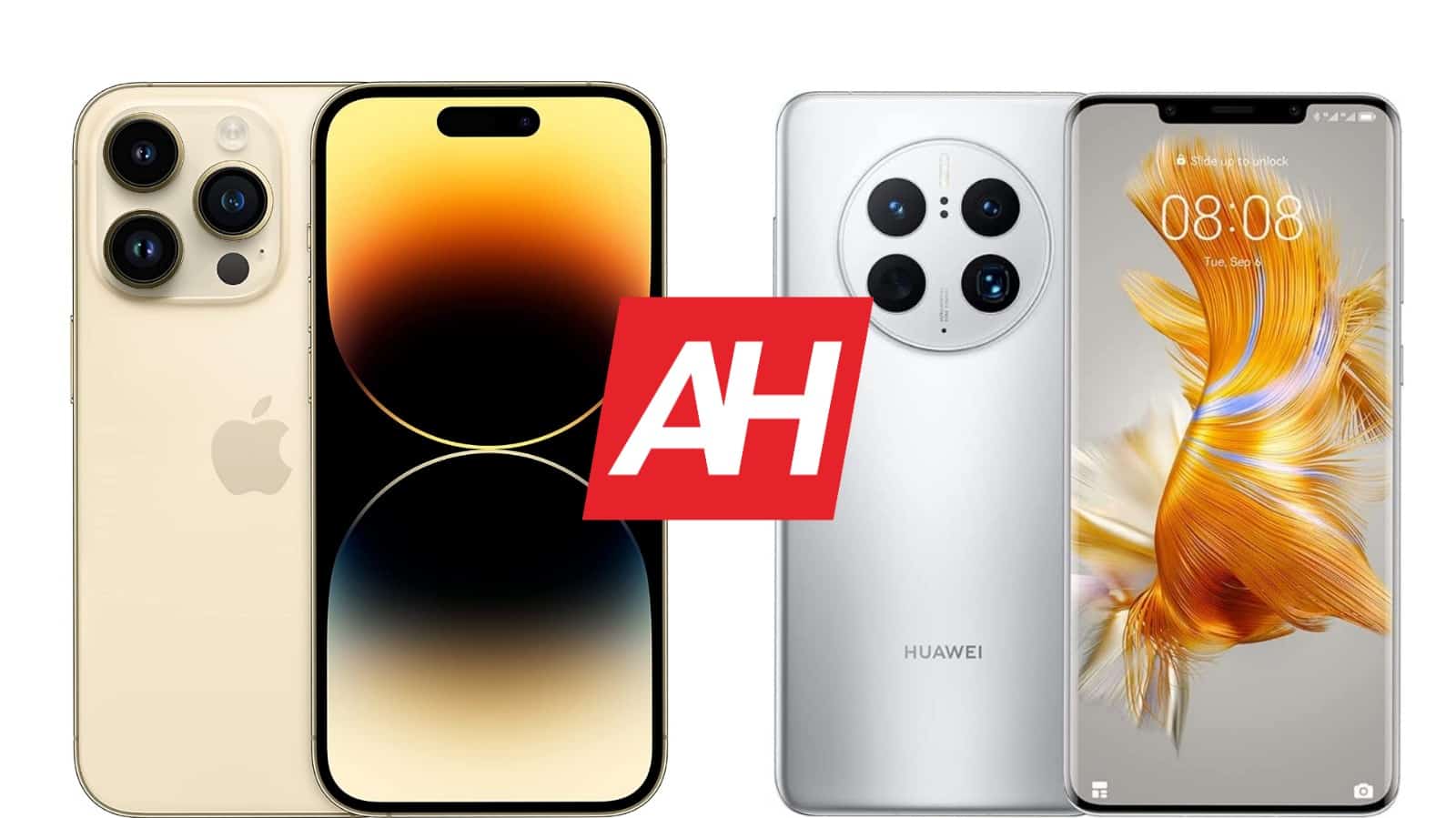 The time has come to compare the very best of Apple and Huawei. In this article, we’ll compare the Apple iPhone 14 Pro Max vs Huawei Mate 50 Pro. These two phones launched 1 day apart from each other, back in September last year. They’re both immensely powerful, and do have a lot to offer. Do note that the Huawei Mate 50 Pro does not include Google services, though, but it does come with Huawei services. It’s still an Android phone, very much so.

Having said that, we’ll first list their specs, and will then move to compare their designs, displays, performance, battery life, cameras, and audio performance. These two phones are fairly different in many ways, and this comparison may end up surprising you. If you’re thinking of getting either of the two phones, you may find what we have to say useful. Read on if you’re interested.

The iPhone 14 Pro Max and Huawei Mate 50 Pro are considerably different-design wise. They do come with a frame made out of metal, and a glass backplate, but that’s where similarities end. Also, there is a vegan leather variant of the Mate 50 Pro, that’s actually the variant we’ve reviewed. In any case, the iPhone 14 Pro Max has flat front and back sides, and the same goes for its left, right, top, and bottom sides. The phone is flat all around.

That’s not the case with the Mate 50 Pro, though. It actually has a lot of curves. Its display is curved, while its back side is symmetrically curved to the front. The iPhone 14 Pro Max has a pill-shaped camera cutout, and symmetrical bezels. The Mate 50 Pro comes with a display notch up top, which is not particularly tall, but it’s quite wide. Even their camera islands on the back are placed in different spots. The iPhone’s is in the top-left corner, while the Mate 50 Pro’s is centered up top.

The iPhone 14 Pro Max is slightly shorter, and wider than the Huawei Mate 50 Pro. It’s also slightly thinner. Apple’s flagship is considerably heavier compared to the Mate 50 Pro. It weighs 240 grams, compared to 205 or 209 grams of the Mate 50 Pro, depending on the variant. The Mate 50 Pro is a lot more pleasant to hold, due to its design and heft. The iPhone 14 Pro Max does cut into your hand a bit when you’re holding it. The vegan leather variant of the Mate 50 Pro is actually a real joy to use, and it feels smaller in the hand than it actually is. Huawei also did a great job with weight distribution. Both phones do feel premium in the hand.

The iPhone 14 Pro Max features a 6.7-inch 2796 x 1290 LTPO Super Retina XDR OLED display. That display is flat, and it offers a 120Hz refresh rate. It does support HDR10 content, and Dolby Vision is also supported. This panel goes up to 2,000 nits of brightness at its peak. It is protected by the Ceramic Shield Glass, and we’re looking at a display aspect ratio of 19.5:9 here. The Huawei Mate 50 Pro, on the flip side. Features a 6.74-inch 2616 x 1212 OLED display. Its display is curved, and it has a 120Hz refresh rate. This display can project up to 1 billion colors. It is protected by the Huawei Kunlun Glass, and we’re looking at a display aspect ratio of 19.5:9, so the same as on the iPhone 14 Pro Max. The Mate 50 Pro does have a higher screen-to-body ratio than the iPhone 14 Pro Max.

Both of these displays are excellent, to say the least. The Mate 50 Pro does not have an LTPO panel, but that’s not something you’ll notice, really. The phone has excellent battery life, so it won’t really matter. Both panels do look very vivid, and have excellent viewing angles. They also offer good touch response, and those deep blacks we’re used to on OLED panels. The Mate 50 Pro’s panel does not get quite as bright as the iPhone 14 Pro Max’s, but it gets immensely bright nonetheless. You can’t go wrong here.

The iPhone 14 Pro Max is fueled by the Apple A16 Bionic SoC. In addition to that, Apple included 6GB of RAM here, and NVMe storage. The Huawei Mate 50 Pro is fueled by the Snapdragon 8+ Gen 1 SoC. It is also equipped with 8GB of LPDDR5 RAM, and UFS 3.1 flash storage. Both phones are well-equipped hardware-wise, but how does that translate to performance? Well, truth be said, these are some of the smoothest smartphones out there.

The iPhone 14 Pro Max did have some issues at first, thanks to some bugs, but Apple fixed those rather quickly. Since then, the phone has been buttery smooth. The Mate 50 Pro belongs in the buttery smooth category as well, though. Huawei did an excellent job with optimizations, and the Snapdragon 8+ Gen 1 SoC is doing a great job. That is one of Qualcomm’s best chips to date.

Both phones simply fly through everyday tasks. They open and close apps fast, the same goes for switching between apps. They’re great for consuming multimedia, browsing, and they can also quickly take great pictures, and so on. Even if you’re a gamer, these two phones won’t slow down. Truth be said, game selection on the AppGallery is quite limited, but based on our testing, this phone can run pretty much any Android game without a problem. All in all, we really don’t have any performance-related complaints.

The iPhone 14 Pro Max has a 4,323mAh battery. The Mate 50 Pro comes with a 4,700mAh battery. Do note that iPhones usually sport smaller batteries than Android phones, but that doesn’t necessarily mean they offer worse battery life. In fact, the battery life is comparable between these two smartphones. We’ve managed to get over the 7-hour mark on both phones, consistently.

That basically makes them really good in the battery department. One thing to note, though, is that gaming was barely included in the usage scenarios, but everything else was. Your results may vary, though, as you do use your phones differently, have different signal strengths, and so on. The battery life on both smartphones is really good, and chances are you won’t have many complaints, regardless of your usage.

Do note that ultrawide cameras on both phones have the same FoV of 120 degrees. Having said that, the Mate 50 Pro also utilizes the XMAGE camera, in other words, it has a variable aperture, and it’s more than a gimmick. Both phones do an excellent job in most scenarios. People usually consider the iPhone’s camera to be one of the most reliable ones, but truth be said, in this comparison, the Mate 50 Pro could possibly be the more reliable one in terms of pictures. It did a great job in pretty much every shot, while the iPhone 14 Pro Max tends to overblow the highlights in certain scenes, and also oversharpen the foliage.

Both phones offer shooting modes that allow you to change the color science before you take a picture. Both phones have immensely capable ultrawide cameras that are in line with the main camera in terms of colors. The Mate 50 Pro does offer greater zoom capability, and up to 3x, the two phones have comparable telephoto cameras. Losing Leica as a partner didn’t really hurt Huawei, it seems, while Apple still needs to adapt its camera processing to the new camera sensor. Still, both phones are utterly excellent when it comes to taking pictures, while the iPhone still has the edge in terms of video recording.

Both phones come with a set of stereo speakers. Speakers on both devices sound really good, they’re quite comparable. They’re even a bit bassy when they need to be, and the soundstage is quite wide. It does seem to be slightly wider on the Mate 50 Pro. Both sets of speakers get plenty loud too, without noticeable distortion.