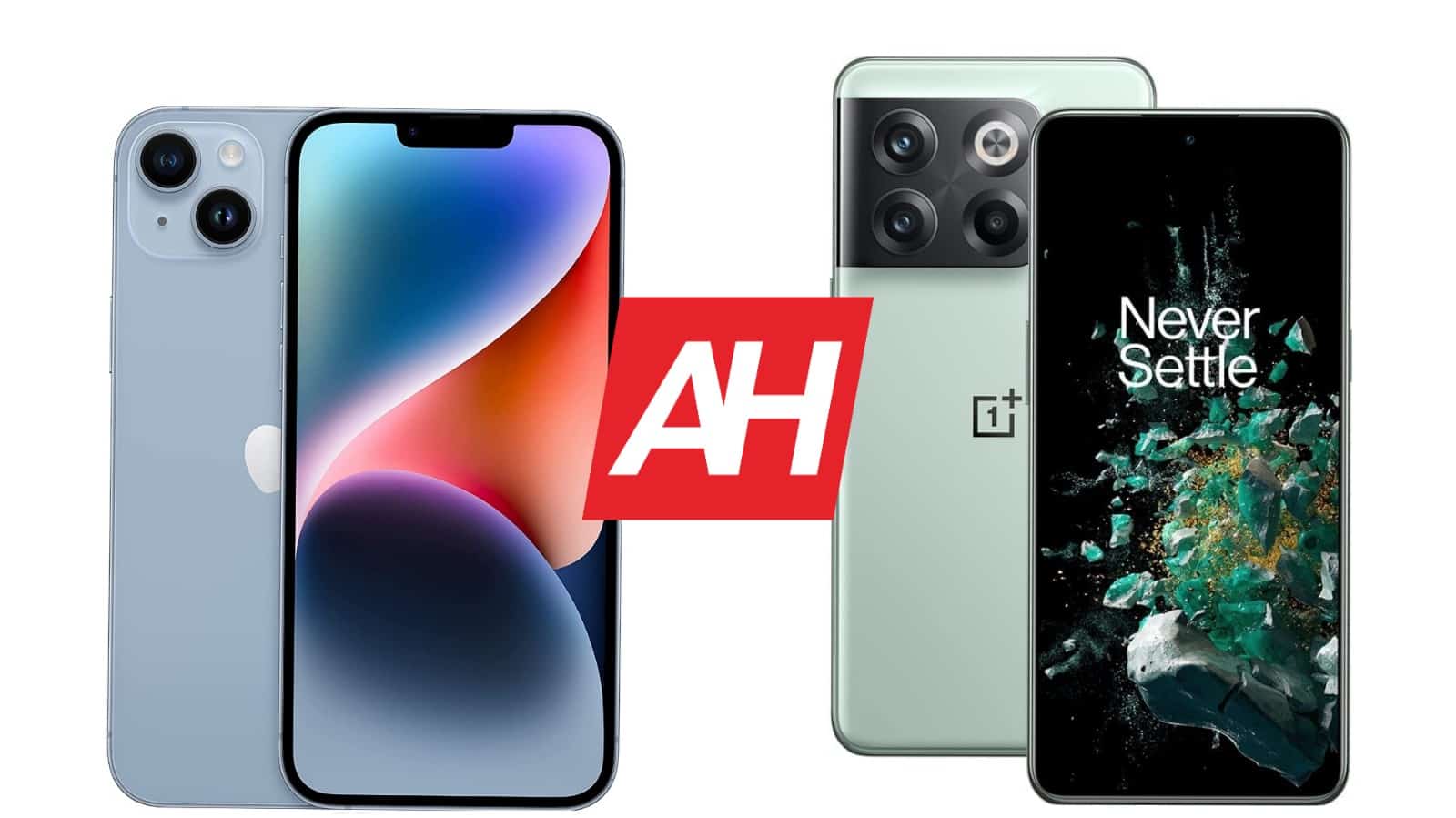 Apple introduced four new iPhone models not long ago, the iPhone 14 series. We’ve already compared the iPhone 14 Pro and Pro Max to many Android phones, and it’s time to check out the iPhone 14 Plus. This handset is very similar to last year’s offerings, it even has the same SoC as the iPhone 13 phones. The thing is, Apple didn’t offer a large non-Pro iPhone last year, which is exactly what this is. That being said, we wanted to compare it to an offering from OnePlus. In this article, we’ll compare the iPhone 14 Plus vs OnePlus 10T.

If we flip them around, you’ll notice considerably different rear camera designs. The iPhone 14 Plus has two cameras in the top-left corner. The OnePlus 10T has three of them, and they’re a part of the camera island which protrudes from one side of the device. These are completely different design approaches. Do note that both phones are quite slippery in the hand, and the iPhone 14 Plus does cut into the hand a bit more, mainly due to its design.

They do have the same display sizes, but their panels are considerably different. The iPhone 14 Plus includes a 6.7-inch 2778 x 1284 Super Retina XDR OLED display. That display is HDR10 certified, and the same goes for Dolby Vision support. It gets quite bright at 1,200 nits of peak brightness. This display is protected by the ceramic shield glass, and it offers a 19.5:9 aspect ratio. This is a 60Hz display, by the way. The OnePlus 10T, on the flip side, has a 6.7-inch fullHD+ (2412 x 1080) Fluid AMOLED panel. That display is curved, and it has a 120Hz refresh rate. It supports HDR10+ content, and can show up to 1 billion colors. It offers a 20:9 aspect ratio, and it’s protected by the Gorilla Glass 5 from Corning. The screen-to-body ratio is quite similar between the two devices, by the way.

So, which panel is better? Well, on paper, the OnePlus 10T definitely has the edge. If you’re used to high refresh rate displays, the OnePlus 10T definitely delivers in that regard. Both panels do offer great, vivid colors, and deep blacks. The viewing angles are also great on both phones, while both displays are more than sharp enough. That refresh rate is the main differentiating point, and you also have to decide whether you want a flat, or a curved display.

The iPhone 14 Plus comes with the Apple A15 Bionic processor. That is the same chip that fuels the iPhone 13 series, and it’s quite powerful. The A16 Bionic is not exactly a huge improvement over it, which is probably why Apple decided to keep it for the iPhone 14 series (non-Pro models). The phone also includes 6GB of RAM and NVMe storage. The OnePlus 10T, on the other hand, comes with the Snapdragon 8+ Gen 1 SoC, up to 16GB of LPDDR5 RAM, and UFS 3.1 flash storage.

Does that translate to good performance in these two smartphones? The answer is yes. Not only good, but excellent. Both of these phones offer great performance through and through. They don’t really get too hot regardless of what you do, while they can handle anything you throw at them with ease. Regular, everyday performance is a breeze, and actually so is gaming. These are some of the smoothest smartphones in the market at the moment, and that says a lot.

The iPhone 14 Plus comes with a 4,323mAh battery, while the OnePlus 10T includes a 4,800mAh unit. The battery capacity is different, but do note that the two OS’ have different battery requirements. In fact, both of these smartphones offer truly excellent battery life. The battery capacity inside the iPhone 14 Plus is slightly smaller than in the iPhone 13 Pro Max, and that device offered stellar battery life. It’s also worth noting that the ‘Plus’ model has a 60Hz refresh rate, compared to a 120Hz refresh rate on the iPhone 13 Pro Max.

What I’m trying to say is, the iPhone 14 Plus has outstanding battery life, and the same goes for the OnePlus 10T. Both of these smartphones are all-day devices when it comes to battery life, and that goes for heavy users as well. We managed to get over 10 hours of screen-on-time from the OnePlus 10T, a number of times. The iPhone 14 Plus should be able to provide you with more than 8, though it will all depend on your usage, network signal, and so on. There are simply too many factors included. Regardless, both smartphones have outstanding battery life, some of the best available from their respective platforms. Both smartphones do take really nice photos during the day. The ones from the iPhone 14 Plus are more true to real life, and the phone is more reliable when it comes to taking pictures. It is far from perfect, though. Its dynamic range is not on par with the Pixels or anything of the sort, and it has a tendency to blow out the highlights. It also tends to oversharpen the foliage, and even water at times. The details are great on both phones, though.

Ultrawide camera is definitely better on the iPhone 14 Plus side. Not only is it more consistent with the main camera when it comes to colors, but it simply performs better in different conditions, and provides sharper images. The macro camera on the OnePlus 10T is not good at all, and chances are you’ll want to avoid it. That goes for basically every 2-megapixel macro camera we’ve tested, the sensor is simply too small.

In low light, both phones perform well, with their main cameras. The iPhone 14 Plus does a much better job with the ultrawide camera. Neither of these two phones is the best in low light conditions, though, there are better offerings out there.

First and foremost, neither of the two phones offers an audio jack. That is not something we’re seeing on high-end phones these days, well, that goes for the vast majority of them. You’ll have to utilize Bluetooth or a wired connection here. Speaking of which, the two phones offer Bluetooth 5.3 and 5.2, respectively. They also include a Lightning port, and a Type-C port, respectively (iPhone 14 Plus and OnePlus 10T).

You’ll find a set of stereo speakers on each device. You’ll be glad to know that both sets of speakers are quite good, actually. They’re punchy, don’t really distort that much at the highest of volumes, and they’re well-balanced. We really don’t have major complaints when it comes to audio output here.