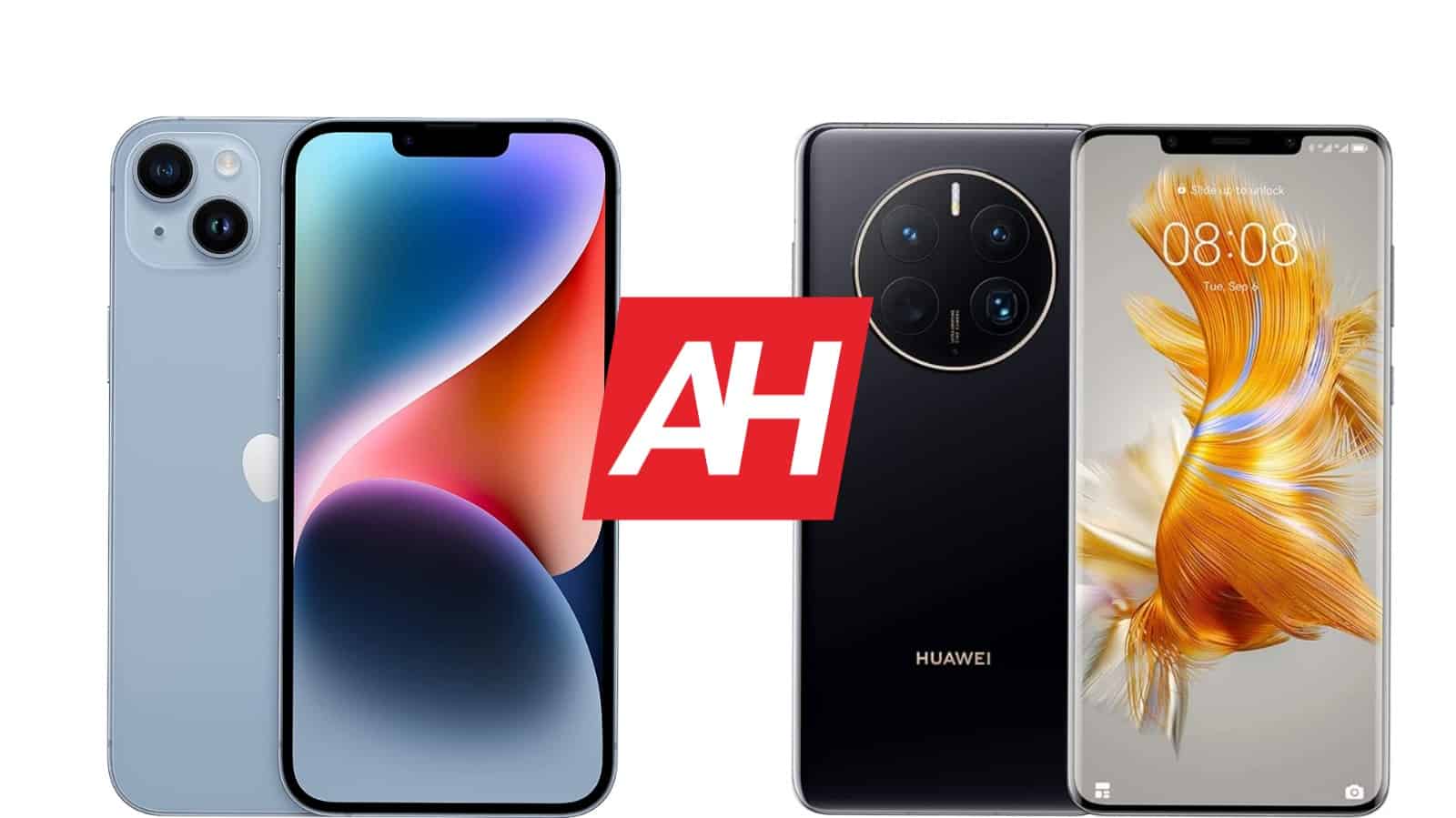 In this article, we’ll compare the Apple iPhone 14 Plus vs Huawei Mate 50 Pro. We’ve already compared the iPhone 14 Pro Max with Huawei’s best offering at the moment, and it’s time to see how the ‘Plus’ model compares. Both of these smartphones are quite large, so if you’re into more compact devices, these two probably won’t interest you. Both of these phones are quite compelling, but they are notably different.

We’ll first list out their specifications, and will then move to a number of other categories. We’ll compare their designs, displays, performance, battery life, cameras, and audio performance, as per usual. Before we get started, however, do note that the Mate 50 Pro does not ship with Google services, so you won’t get access to the Google Play Store or Google’s apps. Huawei’s AppGallery is pre-installed, though, while there are very useful third-party stores at your disposal, such as Aurora Store. That being said, let’s get started.

As mentioned earlier, both of these phones are quite large, mainly due to their large displays. The iPhone 14 Plus is a bit shorter, and wider, while it’s also thinner. It weighs a couple of grams less than the Mate 50 Pro, and that’s not something you’ll notice. Both phones have a frame made out of aluminum, while they also come with glass backs. The Mate 50 Pro is available in a variant with a vegan leather backplate too, by the way. That’s the variant we tested, actually.

The weight distribution is good on both phones, but the Mate 50 Pro was more pleasant to hold and use. It doesn’t have sharp edges like the iPhone 14 Plus, as it doesn’t have flat sides. It’s way curvier than the iPhone 14 Plus, partially due to its curved display. Both phones have extremely thin bezels, and display notches. Both of them also come with advanced facial scanning. The Mate 50 Pro’s notch is wider and shorter.

The iPhone 14 Plus has two cameras on the back, which are a part of the camera island in the top-left corner. The Huawei Mate 50 Pro has a much more pronounced camera island, which is centered at the top of the phone’s back. It includes three cameras, and it’s circular. The vegan leather Mate 50 Pro that we’ve used is a lot easier to use with one hand, as it’s considerably less slippery. Both phones do feel like quality products in the hand.

The iPhone 14 Plus features a 6.7-inch 2778 x 1284 Super Retina XDR OLED display, it’s a 60Hz panel. That panel is flat, and it does support HDR10 content. It also has Dolby Vision support, while it gets up to 1,200 nits of brightness at its peak. We’re looking at a 19.5:9 aspect ratio here, while the panel is protected by the Ceramic Shield Glass. The iPhone 14 Plus has a screen-to-body ratio of 87.4%, approximately. On paper, the Huawei Mate 50 Pro has a more advanced display. The sheer fact it has a 120Hz refresh rate, compared to a 60Hz one on the iPhone 14 Plus, is a major advantage. In almost all other aspects, the two displays are comparable. They both look really good, they’re vivid, and the viewing angles are also good. The blacks are deep, and the touch response is also quite good. We basically have no complaints in terms of image reproduction on either display, they’re both well tuned.

The iPhone 14 Plus is fueled by the Apple A15 Bionic SoC. That is the same chip that fueled the entire iPhone 13 series, and it’s very much still amongst the best processors in the market. The phone also utilizes 6GB of RAM and NVMe storage. The Huawei Mate 50 Pro comes with the Snapdragon 8+ Gen 1 SoC, along with 8GB of LPDDR5 RAM and UFS 3.1 flash storage. Do note that this is a 4G only version of the chip, though, in the Mate 50 Pro’s case.

Does this translate to good performance? Well, yes, and not only good, but great, in both cases. They’re both well-equipped, hardware-wise, but they’re also well tuned. These two phones are buttery smooth in every way, pretty much. Ranging from multitasking and browsing to consuming multimedia and gaming. It doesn’t really matter. They do get warm during longer gaming sessions, but we did not notice any performance drop offs or anything of the sort. Chances are that both phones will keep on performing great for quite some time.

Getting 8-9 hours of screen-on-time from the iPhone 14 Plus is a real possibility. If you’re gaming, you probably won’t go as high, but if you’re not, it’s not a problem to go there. The Mate 50 Pro is closer to 7-7.5 hours of screen-on-time, but I managed to push it to 8 hours on several occasions. Both of these phones do offer excellent battery life, so that’s not something you should worry about. Your results may be different than this, though, depending on your usage and some other factors. The iPhone 14 Plus essentially has the same camera setup as the iPhone 13 Pro series (safe for the telephoto unit, of course). In other words, it’s really good. These cameras are extremely reliable, but not perfect. They tend to struggle with oversharpening at times, with foliage, for example. You can also end up with overblown highlights at times. The vast majority of images look outstanding, though. The Mate 50 Pro, on the other hand, does an excellent job across the board. It very rarely doesn’t provide the picture you’re looking for. It’s extremely reliable, and it provides warm, detailed pictures, it also does a great job in HDR conditions and in low light. Its variable aperture is obviously doing the trick in addition to everything else.

Both ultrawide cameras are excellent, while the Mate 50 Pro does a better job with telephoto shots, simply because of the fact it has a telephoto camera. In fact, it does an excellent job with zoomed-in shots. Its 3.5x optical zoom definitely helps, but the Mate 50 Pro can zoom in truly far away scenes with ease. The further you get, the worse the image gets, of course, but that’s the case with every periscope telephoto shot, of course.

The video recording is excellent on both phones, but the iPhone 14 Plus has an edge there. It does a great job in almost every scene when it comes to video. I’d personally choose the Mate 50 Pro for pictures, and the iPhone 14 Plus for video, if that helps.

Both of these phones include a pair of stereo speakers. Both sets are good, but the Huawei Mate 50 Pro does have an edge in this regard. The sound coming from its speakers is a bit clearer, and the speakers themselves do get a bit louder

You will not find an audio jack on either phone. If you want to achieve a wired audio connection, you’ll need to use the Lightning and Type-C ports on the iPhone 14 Plus and Huawei Mate 50 Pro, respectively. Bluetooth 5.3 (iPhone) and 5.2 (Huawei) are included on the two phones as well, for wireless connections.