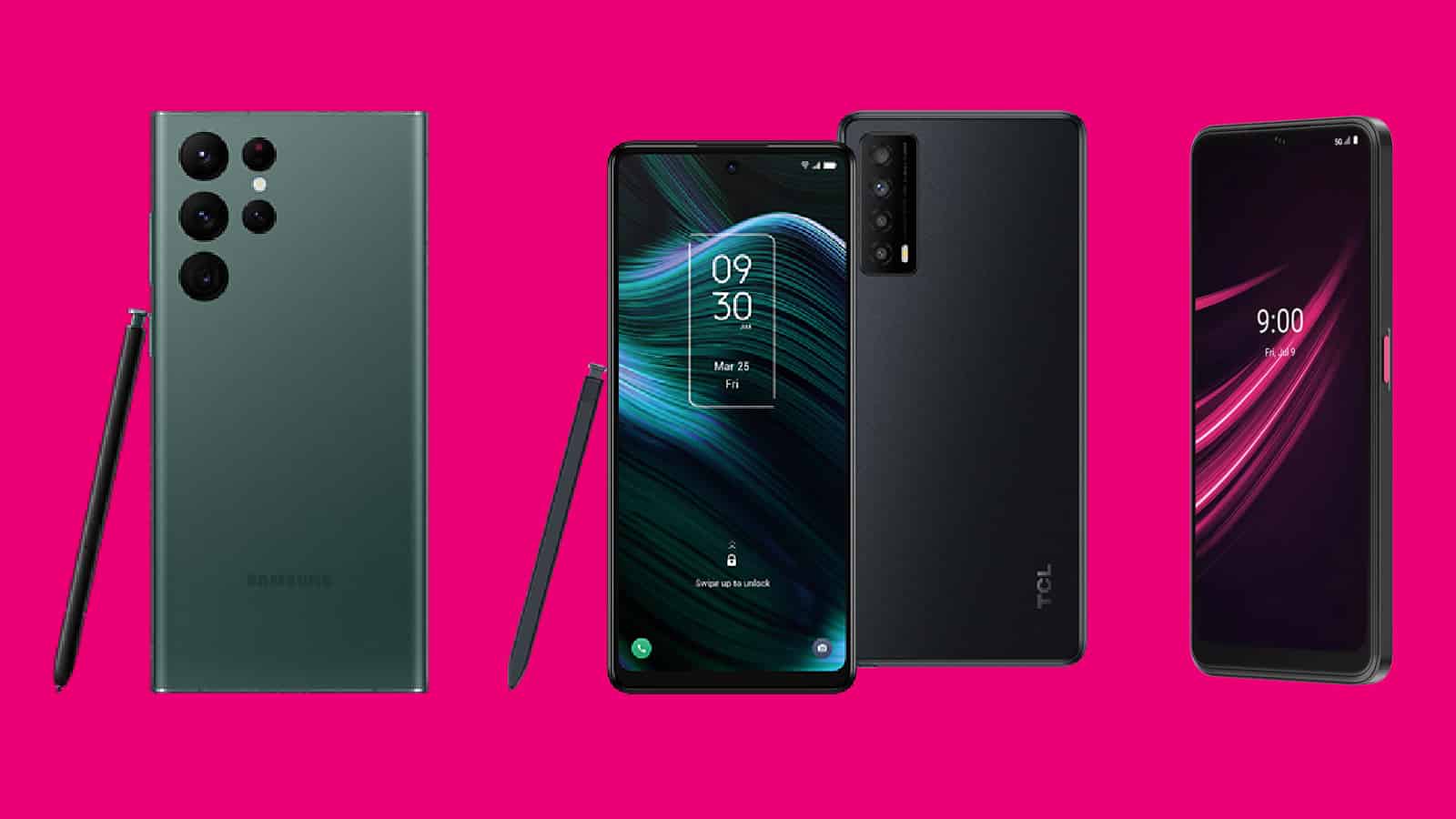 T-Mobile is one of the big three here in the US. Up there with AT&T and Verizon for the major carriers that Americans can use their smartphones on. It acquired Sprint not too long ago, bringing the big four down to the big three.

T-Mobile likes to cater more towards the tech nerds out there. So you’ll find a lot of phones that are only available on T-Mobile here, like the OnePlus 10 Pro and the TCL Stylus 5G among others. So you’ll see some here that are not on our other lists.

T-Mobile has phones that range from around $100 up to over a grand. This list isn’t just Android smartphones – though about 90% Android. So that there is something here for everyone. Now T-Mobile does tend to discount their phones quite often, so you’ll want to check their site for whatever promos they are currently offering.

Now, unlike AT&T and Verizon, T-Mobile still does 24 months for its financing. So these prices will appear to be higher than the competitors. But it’s the same price, you’ll just actually be paying it off sooner. All of these prices are per month, for 24 months unless otherwise stated. The TCL Stylus 5G is the newest smartphone to land at T-Mobile. It’s a pretty cheap smartphone, that T-Mobile is actually offering for free, as long as you stick around for two years.

It has a 6.81-inch FHD+ display, a MediaTek Dimensity 700 chipset with 4GB of RAM, 128GB of storage and a 4000mAh capacity battery. There’s also a stylus built-in, as the name indicates. Making it a great phone to take notes with. The moto g stylus 5G is one of the cheaper 5G smartphones you can buy, and it even comes with a stylus. Now it’s nowhere near what Samsung offers with the S Pen, but it is a stylus. Especially since you can get it for free right now at T-Mobile. The Galaxy S22 is one of the smaller, flagship smartphones on the market today. With a 6.1-inch FHD+ 120Hz display.

Samsung equipped the Galaxy S22 with a Snapdragon 8 Gen 1 processor, with 8GB of RAM and 128GB of storage on-board. There’s also a 3700mAh capacity battery inside, which is also pretty small. But it did get through a full day in our testing.

See also  The best gaming chairs you can buy The moto g 5G (2022) is a pretty cheap smartphone, but still has plenty of storage for its price.

This has a 6.5-inch 720P display, powered by the MediaTek Dimensity 700 processor, with 6GB of RAM and 256GB of storage on-board. Which is quite impressive. It also has a micro SD card slot available for expanding that storage.

Finally, it is powered by a 5000mAh capacity battery that should run for a couple of days and then some. This is the “boring” Pixel 7, but still a really good option. It sports a 6.3-inch FHD+ 90Hz AMOLED display, with the same Google Tensor G2 chipset, 8GB of RAM and 128GB of storage. It does also come in a 256GB variant. This is all powered by a 4355mAh capacity battery as well.

Google has promised three years of software updates, and five years of security updates (until 2025 and 2027 respectively) for the Pixel 7. The OnePlus 10 Pro 5G is only available  at T-Mobile (or unlocked). So if you want it, T-Mobile is the carrier to go to.

It sports a 6.7-inch QHD+ 120Hz display, it uses LTPO2 so it can intelligently go from 10Hz to 120Hz. There’s also the Snapdragon 8 Gen 1 processor inside, with 8GB of RAM and 128GB of storage on-board. Which is pretty impressive here.

The Galaxy A53 5G is a really great smartphone with flagship features without the flagship price. As you can see, this is $10 per month for 36 months (for $360 total). It offers a 6.5-inch FHD+ Super AMOLED 120Hz display – not LTPO though so it doesn’t adapt.

It is powered by the Exynos 1280 processor, 6GB of RAM and 128GB of storage. There’s also a massive 5,000mAh capacity battery inside, the same size as the Galaxy S22 Ultra, for a fraction of the price. Rounding out our best T-Mobile phones list here, we have the iPhone 14. We chose the standard iPhone 14 out of the four models, because it’s the best value. It’s $799 full retail, and offers a faster processor than most Android flagships. That’s thanks to the Apple A15 Bionic, which is incredibly fast.

Surprisingly, there’s only 6GB of RAM here, with 128GB of storage. There are 256GB and 512GB models available too. It has a pretty small 3279mAh capacity battery but it will still last you all day, thanks to the insane software optimization that the iPhone has.

The kicker here is that this phone will likely be updated far longer than any of the other phones on this list. Apple recently stopped updating the iPhone 6S after more than six years of new iOS updates.